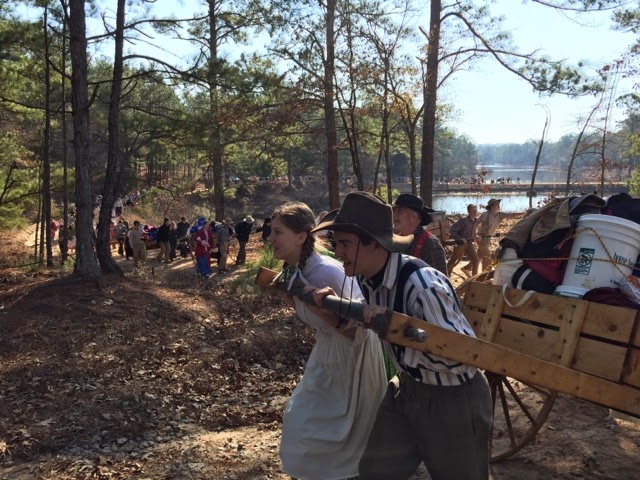 I grew up in the LDS Church however, doing mini pioneer reenactments which are known as "Trek", came after my time in the Young Men's program.  In fact, the big Church-sponsored sesquicentennial reenactment arrived in Salt Lake City on July 24, 1997 just a few days after I had returned home from my mission.  Trek, grew out of that original 150-year commemoration and celebration.
The Augusta Georgia Stake just carried out a multi-stake Trek involving over 400 participants and over 300 youth from 3 Stakes.  I was excited to participate with my son in both our first Trek experience.  Not having anything to compare it to, I have to say the entire 4-day/3-night event came off as an incredible spiritual highlight for all those involved.
Pioneer Story:
The LDS Mormon Pioneer "Trek" Reenactment commemorates the great faith and perseverance of the original Mormon pioneers who settled Utah in the mid 1800's.  The LDS Church actually began in Pennsylvania in 1830.  But because of religious persecution, even in the Great Land of Liberty the LDS church body was forced to move from state to state before finding a permanent home.
The first settlement of the LDS Church was in Kirtland, Ohio.  But after financial difficulties, the church next tried Independence, Missouri.  The Missourians and the Mormons clashed to the point of a conflict breaking out known  as the Mormon War resulting in the State Governor Lilburn Boggs signing an extermination order authorizing the shoot-on-sight murder of any Mormon within the state.  The Mormons were obliged to leave their property and flee to Illinois where they founded the City of Nauvoo on the Mississippi River.
Nauvoo was a beautiful and prosperous city and at that point the second largest city in the state to Chicago.  However, peace did not last long.  Eventually, Joseph Smith and his brother Hyrum were arrested on trumped-up charges and allowed to be killed while in State custody by a lawless mob with black-painted faces. With not a single shred of protection by the State or the Federal Government, the lawless mobs forced the LDS membership to lock up their homes and shops, place what few possessions  they could in wagons and in the dead of winter, walk away from their city, their homes, their businesses, their orchards, their farms and their temple.
In the Great Land of Religious Liberty that promised its citizens the right to life, religion, and property; the Mormon Saints were forced to leave the United States and settle the barron desserts and mountain valleys of what was at the time Mexican Territory.  The Mormon Pioneers, led by the Lord's prophet Brigham Young, walked 1300 miles to the Salt Lake Valley beginning in the winter of 1846 and finally arriving in The Great Salt Lake Valley July 24, 1847.
Trek Impressions:  Unseen Preparation
The first impression I had during Trek was even before the event began.  The amount of preparation that was needed before hand was considerable.  It was not an easy talk to arrange food, water, bathroom, medical and sleeping arrangements for 400 people.  But the spirit of cooperation was wonderful.  Handcarts were constructed, meals were planned and prepared, pioneer-style clothing was sewn and/or otherwise obtained.
My spiritual feeling on the preparation was that the young men and women who participated saw very little of what went on behind the sences. Like most of the pioneer journals, they left on this date and they arrived on this date with very little difficulty.  I am sure we do not see or appreciate the preparation that occurs on the other side of the veil in our own lives by spirits who love us and are concerned with our safe arrival back to our heavenly destination.
Trek Impressions:  Adversity
There is something universal about being called by God to forsake the world and leave society and be led by God out of the city into the wilderness or desserts to start over.  Abraham was led out of Ur.  Moses left Egypt.  The Brother of Jared left Babel, Lehi fled JerusaIem and Israel returned from Babylon.  God may also call us to endure great adversity, persecution, physical pain and privation, illness, and even pass through a furness of affliction.
A few Mormon Pioneer handcart companies got caught in early winter weather in Wyoming.  The members of these ill-fated companies were later criticized for leaving so late in the season which they had been specifically instructed not to do.   However, one survivor of the Martin amd Willie Company is recorded as saying in response to criticism:

“I ask you to stop this criticism. You are discussing a matter you know nothing about. Cold historic facts mean nothing here, for they give no proper interpretation of the questions involved. Mistake to send the Handcart Company out so late in the season? Yes. But I was in that company and my wife was in it and Sister Nellie Unthank whom you have cited was there, too. We suffered beyond anything you can imagine and many died of exposure and starvation, but did you ever hear a survivor of that company utter a word of criticism? Not one of that company ever apostatized or left the Church, because everyone of us came through with an absolute knowledge that God lives for we became aquainted with him in our extremities."

“‘I have pulled my handcart when I was so weak and weary from illness and lack of food that I could hardly put one foot ahead of the other. I have looked ahead and seen a patch of sand or a hill slope and I have said, I can go only that far and there I must give up, for I cannot pull the load through it.’” He continues: “‘I have gone on to that sand and when I reached it, the cart began pushing me. I have looked back many times to see who was pushing my cart, but my eyes saw no one. I knew then that the angels of God were there."

Trek Impressions:  Base Camp Heaven
I served as trek Doctor for our group.  I choose to walk the 25-mile route and sleep out with our Trek participants so as to be on-hand for any eventuality.  Of all the youth, only one participant was swmt home before even starting  because of a flu illness she had already had and was hoping was coming to an end.  A very few others at various points developed sore feet or ankles such that we determined that they no longer continue walking.  Several groups put an injured family member on top of their carts and pulled them to the next camp.  In a few other cases a participate was evacuated back to basecamp for closer medical attention.
Base camp was a beautiful Lodge and conference center located at Lake Leitner on Fort Gordon. The Lodge was warm and featured clean bathrooms, fireplace, multiple couches, and a great snack table.  I often referred to Base Camp as "Our Little Trek Heaven".  I visited our heaven several times during the Trek to resupply myself with motrin and ACE bandages.  A few of our Trek participants and adult support staff slept in the Lodge or in RV's nearby.  I had chosen to sleep out with the youth under my own tarp in case a need arose during the night.
After sitting down on a couch in the Lodge, I remember how difficult it was to pull myself off to go back to camp to sleep out in the freezing cold.  I assume my feelings were akin to what heaven will feel like.  Many Near Death Experiences express similar feelings. When it comes to those pioneers who died crossing the plains coming to Utah, I suppose being taken to heaven is not unlike being taken to our Trek Base Camp. The few participants who slept at base camp still participated in all the games and activities without having to walk in pain or sleep out in the cold. This aspect of Trek reminds me of the last verse in "Come Come Ye Saints":
"And should we die before our journeys through, happy day, all is right.  We then are free, from toil and sorrow too.  With the just we shall dwell.  But if our lives are spared again, to see the Saints, their rest obtain. Oh, how we'll make this chorus swell.  All is well! All is well!"