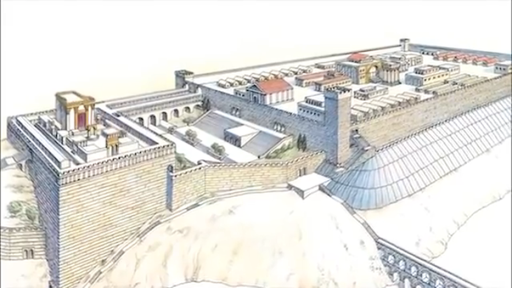 Ps 48:12-13 "Walk about Zion, and go round about her: tell the towers thereof.  Mark ye well her bulwarks, consider her palaces; that ye may tell it to the [last] generation."
The ancient temple at Jerusalem may not have stood on the Haram al-Sharif or so-called "temple mount" where the Al-Aqsa Mosque and Dome of the Rock stand today. Some historians and archaeologist are claiming that what is known as the temple mount today is likely the ancient Roman Antonia Fortress.  Instead, the ancient temple would has stood 600 ft to the south on Mount Zion in the City of David.
1. Jesus Christ prophesied that not one stone of the temple complex would be left upon another (Matt 24:1-2, Mark 13:2). The reason why every rock was up-turned on the temple complex was because when Titus burned the temple, its gold melted and flowed down in between the foundation stones.  Soldiers overturned all the stones to get at the gold.  Josephus commented that the  destruction was so complete that no one would have guessed a temple stood in that location.
2. The Antonia Fortress would have been a massive structure housing the 10th Legion comprising 6000 soldiers and at least 4000 additional support persons including numerous horses.  The Fortress would not have been a small appendage to the temple complex but would have dwarfed it.
3. According to Josephus, the Antonia Fortress was built around a massive 75 ft rock.  The Romans built massive walls around the rock (Foundation Stone) and then back-filled the area creating a plateau on Mount Moriah whose southeast tower looked down on the temple complex.  The higher elevation of the Antonia Fortress  explains why the Roman soldiers "ran down" from the Fortress to arrest Paul just outside the temple gates for inciting a riot (Acts 21:32).  The Antonia Fortress complex was connected to the temple complex by two 600-ft colonnades (arms) flush with its western wall.
4. The Bible indicates the Holy Temple stood in on Mount Zion, in the City of David (Ophel), over the Gihon Spring which flowed beneath its southeast corner (Ezek 47:1-12).  Josephus said that the temple complex stood on a 600ft crescent ridge between the Kidron and Tyropoeon (Cheesemonger) Valleys.
5. The Gihon Spring is a siphon fed by an aquifer under Mount Scopus.  Vertical  channels from the spring would have supplied the temple with needed fresh water.
6. During the time of the Maccabees, the Temple was descrated by Greeks . Simon the Hasmonean decided to purify and remove Mt. Zion, leveling the citadel (Akra) and throwing it into the Tyropeon Valley.  After Simon's leveling of the Ophel and Akra of the City of David, the hill west in what became known as Upper Jerusalem began to be called Mt. Zion.
http://www.biblemysteries.com/lectures/temple.htm 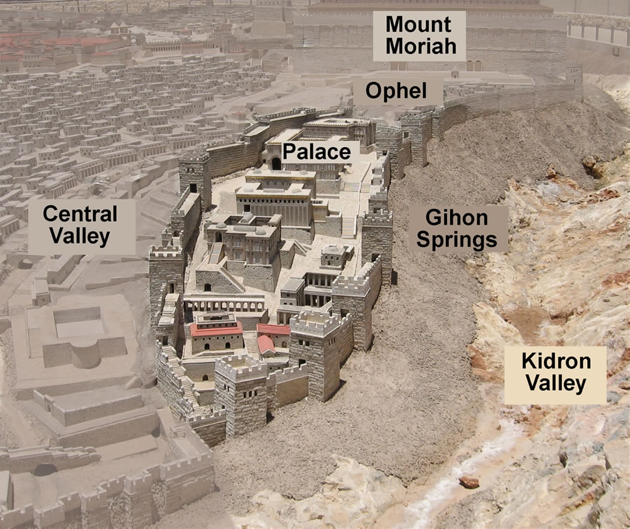 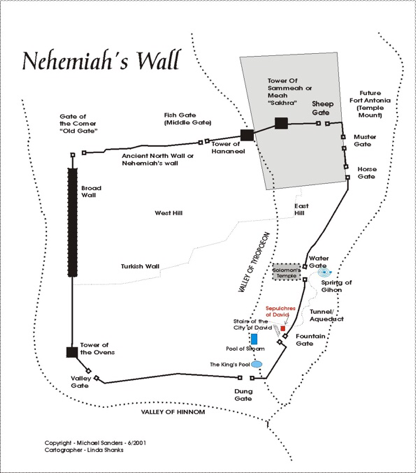 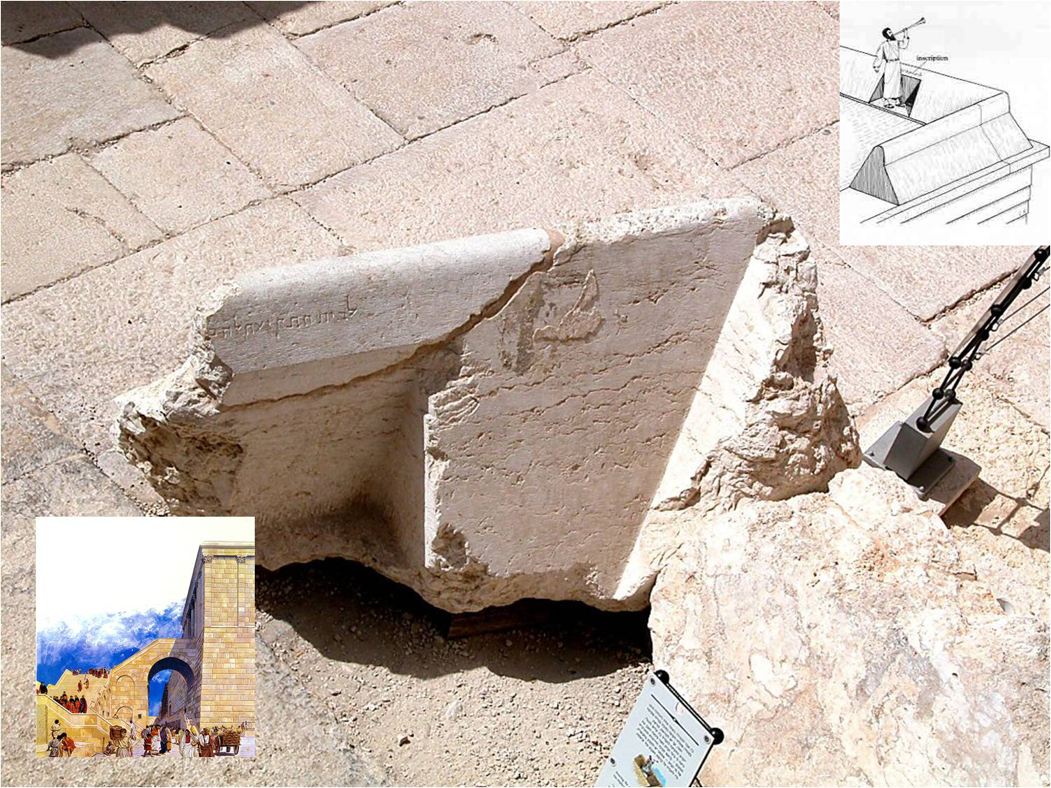 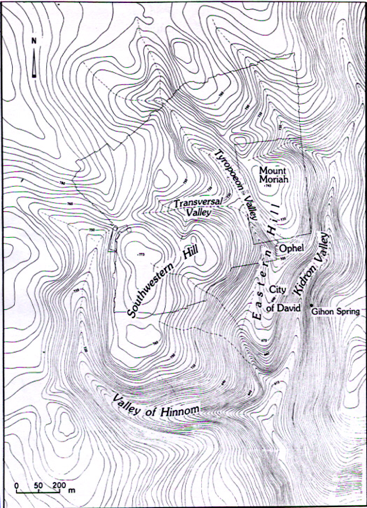 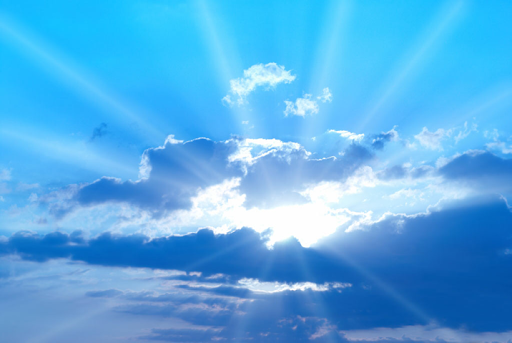 The Tabernacle and Holy Temple were constructed so that man could enjoy the Divine Presence (Shechinah).  In the Old Testament, the cloud by day an firey pillar by night served as physical protections.  In latter-day temples, the covenants of the temple provide spiritual protection from sin and temptation.  Covenants are how Heavenly Father is present in our lives.  Similarly, our involvement with our children can protect them. Fathers being present and involved in our children's lives will likewise protect them from harm and temptation.

Ezra and the Rabbinical System 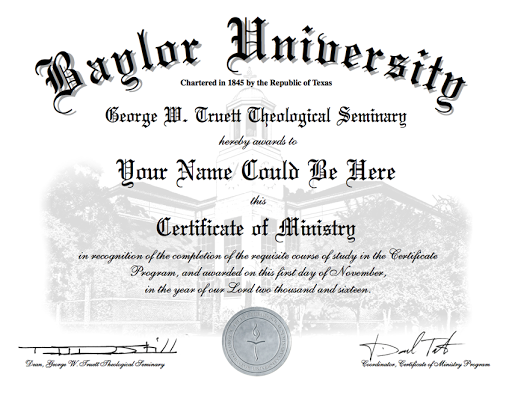 I asked a Jewish colleague once who was the rightful ancient High Priestly line, Ezra or Joshua, son of Josedech.  He said there was some debate on the matter.  According to the Bible, Ezra and Nehemiah came late from Babylon to Jerusalem and deposed the families of Joshua and Zerubbabel.
Ezra had found that several of Joshua's sons had married locals (likely second wives).  Ezra and Nehemiah were concerned that these "strange wives" would turn Israel's heart away from God like Solomon's wives had.  Ezra used these infractions and the authority and money of Ataxerxes to establish a Rabbinical system of scribes and Pharisees that Jesus of Nazareth condemned. Ezra founded a proto-Sanhedrin and enforced Jewish Law through the confiscation of property (see Ezra 7).
Since the establishment of the Judaic rabbinical and scribal system, the divine presence was not experienced in the Second  Temple and God ceased direct revelation to Israel through prophets.  Zechariah and Malachi were contemporaries of Ezra and Nehamiah and revelation ceased  until John the Baptist.  The Jewish Rabbinical system caused the Jews to misunderstand scripture and fail to recognize their Messiah.
Today, Christianity has established a similar scribal and rabbinical system through its many divinity schools that teach the creeds of man as doctrine (Nicene, etc.).  These schools of theology have similarly turned the hearts of many Christians away from the truth of Jesus Christ.  The Kingdom of God is established again on the Earth with prophets, apostles, priesthood keys,  revelation, scripture, and the restoration of the Holy Temple. However, like the Pharisees of old, many Christians have been blinded from recognizing the truth because of their reliance upon the arm of flesh.
The consequence of a reliance upon an academic and scribal system was the division of the Jews into various sects: Pharisees, Sadducees, Samaritans, Essenes, Zealots, Herodians, Hasideans, Therapeutae, and Zugot.  We see this same division in Christianity today.

The Idaho Falls Temple was rededicated by President Eyring this last weekend.  In keeping with the spirit of the original dedicatory prayer, President Eyring prayed for the preservation of the US Constitution and Bill of Rights and in so doing, preserve our freedom.  In 1945, at the original dedication of the Idaho Falls Temple, President George Albert Smith included in the dedicatory prayer these words:

"We thank Thee that Thou has revealed to us that those who gave us our Constitutional form of government were wise in Thy sight and that Thou didst raise them up for the very purpose of putting forth that sacred document....Thou did'st [raise] up wise men for the very purpose of giving us our Constitution.... We pray Thee that Thou wilt inspire good and just men everywhere to be willing to sacrifice for, support and uphold the Constitution and the government set up under it and thereby preserve for man his agency."


But what are the threats to our nation's Constitution? Poverty is the greatest threat to freedom. That is why scripture makes that point that the perfect Zion society has "no poor among them". What is the main driver of poverty?  Sexual sin and drug abuse leads to greater poverty via broken families and decreased productivity.


How does poverty threaten freedom?  Poverty leads to bloated government welfare programs which usurp our individual rights and liberties. Government welfare exacerbates the problem of poverty by enabling it and never reforms or rehabilitates. Government welfare redistributes without accountability.   Fascists and dictators have always come to power promising greater social justice via the redistribution of wealth. (Rome = free bread and circus, Communists, Nazi's, Castro, etc)

Welfare according to James 1:27 is the business of "pure religion". So, if we believe in a separation of church and state, the State needs to get out of the business of religion. Religion needs to do its job by providing welfare and promoting virtue. The US Constitution reads, "Congress shall make no law respecting an establishment of religion, or prohibiting the free exercise thereof". Well, welfare and marriage are establishments of religion. Ancient Religion addressed welfare, caring for the fatherless and widow using the institution of the family via marriage/polygamy and adoption.

However, we are never going to get anywhere in saving Constitutional Government if all we talk about is limited government, but we do not address the problem of poverty. We cannot convince liberals to support the constitution if they think our solution to poverty is just to "cut everyone off" and have all the single moms and disabled "go get jobs like the rest of us".  Unless we address the poverty problem we won't be address the real threat to the Constitution, and we won't be addressing the major concerns of Liberals and Democrats which currently divide our country.