The 12 Spies: Truth and Transparency

The Old Testament (Num 13-14) tells the story of 12 spies sent by Moses to investigate the land of Canaan before their arrival.  A prince of each of the 12 tribes was selected to check out the promises land and then return and report.  10 of the spies returned with a negative and critical report.  Only the 2 remaining spies, Joshua and Caleb, gave an optimistic, positive and encouraging report (Num 14:6-9).  The Bible records that the people sided with the naysayers and desired that Joshua and Caleb be stoned to death.

Accordingly, God was angry with the people of Israel for their lack of faith and cursed them to wander in the wilderness for 40 years until all the pessemistic older generation had died. Only Joshua and Caleb were blessed to enter the Promised Land; each received their own city as a reward for their faith.

Several people I know have been troubled by  some recent high-profile excommunications by the Church of Jesus Christ of Latter-day Saints of several vloggers, podcasters, and critics of the Church.  The Church of Jesus Christ claims to be of divine origin and direction, but it does not claim to be perfect in the execution of its mission and purpose.  Accordingly, I likewise partially sympathize with some of those who have been excommunicated.  Some of the issues raised by critics of the Church have some merit and have even brought about recent policy changes.

Nevertheless, some of these courageous individuals failed to understand a few key principles which has led many of them to take up the wrong attitude and tone towards the Church of Jesus Christ. Critics of the Church who make their criticisms public and seek to take sides against the Church will inevitably be admonished at least twice to refrain and possibly retract from their public criticisms.  If they refuse, they will be brought before a local disciplinary council. If during that council, they fail to show any remorse or contrition, they will be excommunicated for apostasy. In many cases critics of the Church fall upon their own sword of truth and transparency.

I am all for truth and transparency, however, there are several major principles excommunicated critics are missing here:

1. The Church is set up to help and not hurt people.  It is not the “Great Satan”, and does nor deserve to be spoken about with a derisive tone and attitude reserved for your worst enemy. The Church is not the enemy.  There are plenty of people, causes and groups out there who openly or surreptitiously seek to harm people.  I admonish people looking for a cause to direct their verbal and media attacks, pessimism, and negativity towards these harmful persons.  Instead, it is the express mission of the Church to visit the fatherless and the widow in their affliction (welfare) and help keep its members unspotted from the world (virtue). (James 1:27).  That said, corrupt individuals in positions of authority  can cause harm. I agree that there should be mechanisms to prevent these abuses.  Bad actors must never use positions of Church authority to victimize others.

2. We should be careful that in our search for greater truth and transparency, we are not degrading peoples faith in the process. The Church of Jesus Christ and the covenants of the Holy Temple are the mechanism that will ultimately bring us to an eventual “unity of the faith” (Eph 4:13), and “peace on Earth.” (Isa 2:4).  Public criticism damages faith in the Church as an institution in the eyes of those who do not fully understand the context of these criticisms— even if legitimate.

For example, if someone is critically ill or injured and they go to the emergency department for help, it is not in the interests of the patient or the hospital to divulge to the patient all the medical mishaps and mistakes we had last month. The hospital has multiple mechanisms for internal and external quality review.  One of these mechanisms is the mortality and morbidity conference (M&M).  These conferences are non-discoverable, but allow doctors together with their colleagues to privately review mistakes or close-calls and identify and implement needed changes.

It wouldn’t  do the patient any good to bombard them with M&M Conference data while they are checking in for assistance.  In this scenario, truth and transparency can actually cause more harm.  Data, without the proper understanding and context, is not truth and can lead to an erosion of faith in our institutions, secular and sacred.

The OT compares and contrasts the examples of Korah vs. Zelophehad’s daughters.  Korah was resentful of Moses and Aaron and thought that he could lead Israel just as well or even better than Moses.  So, Korah instigated an insurrection which resulted in his followers and he being swallowed up by the Earth.  Zelophehad’s daughters, on the other hand, discreetly and respectfully petitioned Moses and the Lord bringing about greater equality and social justice.

4. In the same way M&M Conference data is not appropriate during patient registration, traige and assessment; certain historical complexities are not appropriate during the investigation and conversion process. Doubts and concerns can and should always be addressed but most times attention should be directed and refocused back to the main doctrines of the gospel of Jesus Christ.

If a person feels like the Church of Jesus Christ is worthless and harmful, they have every right to believe that, outside the Church.  If instead, someone believes that the Church is a help, and beneficial, then they should not have a problem  with the Church attempting to put its best foot forward, and reserve the historical complexities and oddities for another time when the these distracting side-issues can be better presented and understood in their historical context.

5. Lastly, if you or someone you know ever have the misfortune of being invited to a Church disciplinary council as a consequence of a blog, book, or podcast that is giving a negative report (spin) of the Church; my advice to such person would be to a. don’t invite the media, b. if you value your blessings, adopt a contrite “sackcloth-and-ashes” attitude.  and c. most importantly, remember your covenants.  Remember that we are expected to keep our covenants even though life circumstances often give us excuses and justification to break them. We all give God plenty of justification for Him to cast each one of us off forever.  But God is God because He is the ultimate Man of His Word.

I am sure the 10 critical and pessimistic spies could claim they were just giving an honest report in the name of truth and full transparency.  Maybe there really were true-to-life giants in Canaan. However, the error of the faithless spies was that their evil report served to diminish the faith of the people of Israel in fulfilling the commandments of God.  Consequently, these critics and those who followed them were judged by God to be in open rebellion and were required to pay an enormous price.  The Bible suggests that God punished Israel, requiring them to wander in the desert for 40 years.  Maybe Israel determined their 40-year fate themselves.

CNN recently featured an article about President Russell M. Nelson’s call for the Church of Jesus Christ of Latter-day Saints to emphasize its revealed name and get away from the “Mormon” moniker. President Nelson did an inspired job of focusing the interview on the reality and process of revelation.
The amazing part of this story was the mention of President Nelson’s yellow notebook which he places at his bedside night-table. President Nelson described the process of receiving thoughts, ideas, and inspiration in the middle of the night. What is intriguing, is that while only the President of the Church receives revelation for the Church, the process of revelation decribed by President Nelson is accessible to anyone. Revelation, in the way President Nelson described, didn’t require any special religious artifact, relic, instrument, chemical substance, or location. In addition to a bedside notebook and pen, the only other secret was virtue and moral purity. President Nelson advised that revelation requires that our souls be "as pure and clean as a piece of blank paper that lies upon the desk."
Numbers 11:29 “And Moses said unto him, Enviest thou for my sake? would God that all the Lord’s people were prophets, and that the Lord would put his spirit upon them!”
https://www.cnn.com/2019/03/22/us/mormon-lds-name-change-revelation/index.html

President Russell M. Nelson, President of the Church of Jesus Christ of Latter-day Saints recently was in Rome, Italy for the dedication of the Rome, Italy temple.  President Nelson was accompanied by the other 12 Apostles and said to the media and in the temple’s dedicatory prayer that the dedication of this temple represents a “hinge-point” or pivot in the history of the Church of Jesus Christ just as the missions of Peter and Paul to Rome represented a pivot of the ancient Church from the Jews to the Gentiles. President Nelson did not specify the nature of this pivot but said the Church is preparing for and can expect an acceleration in growth.
"This is a hinge point in the history of the church. Things are going to move forward at an accelerated pace, of which this is a part," he said, later adding, "The church is going to have an unprecedented future, unparalleled; we're just building up to what's ahead now." -- President Nelson
D&C 99:9 “That through your administration they may receive the word, and through their administration the word may go forth unto the ends of the earth, unto the Gentiles first, and then, behold, and lo, they shall turn unto the Jews.”
1 Nephi 13:42 “And the time cometh that he shall manifest himself unto all nations, both unto the Jews and also unto the Gentiles; and after he has manifested himself unto the Jews and also unto the Gentiles, then he shall manifest himself unto the Gentiles and also unto the Jews, and the last shall be first, and the first shall be last.”
https://www.deseretnews.com/article/900060133/why-president-nelson-took-all-latter-day-saint-apostles-to-rome-and-what-they-said-about-it.html 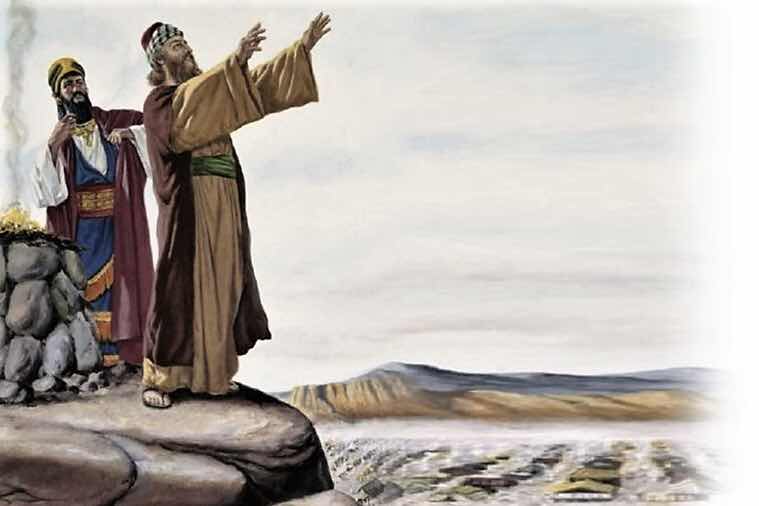 The idea of a “chosen people” is actually anti-identity politics.  The point some people miss about being a “chosen people” is that no outside power can prevent G-d’s people from realizing their G-d-appointed potential, aims, and destiny.  Only G-d’s people themself can interfere with their own safety and prosperity through their own harmful behavior.   G-d’s people can never be victims of outside oppression; except as a consequence of their own sin.  This was the whole point about the story of King Balok and Balaam.  That doesn’t mean enemies won’t attack, but those attacks will “come to naught”.

So for a “chosen person” to claim they are oppressed by an outward influence is to confess that they actually believe they are 1. not living in the right way or 2. not chosen.  When G-d’s “chosen people” face potential oppression, the first step is always self-examination and repentance.

Temples of the Church of Jesus Christ

Baptism for the dead does not convert or make someone Christian against their will.  It remembers someone and offers them something they can accept, reject or ignore. Baptism for the dead is performed privately and not publicized only so the ordinance is made available if sought for by the deceased.   It is remembering and praying for an ancestor. Baptism for the dead doesn’t negatively affect that person or their memory in life or death. We believe Christ went to the spirit world and taught the spirits in prison (those not baptized).  Christ’s followers continue this work of preaching in the spirit world. Baptism releases those who have accepted Christ from spirit prison to paradise.