Metal and the Book of Mormon 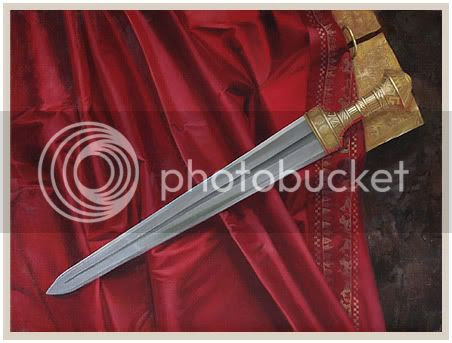 Many Christians refuse to even consider the Book of Mormon because of what they consider, a lack of archeological evidence to support it's setting and events. This is also what is know as a presumed problem of "historicity." The Book of Mormon's mention of steel, for instance, is considered an example of one of its major flaws. However, I think this minor bit of trivia will prove to be one of the Book of Mormons more fascinating evidences.

Nephi was skilled in metalwork. He the first scenes of the Book of Mormon, Nephi is able to describe Laban's sword with precise detail. It had a hilt of pure gold and the blade was of the "most most precious steel." Now why would Nephi think plain old steel would be precious in comparison to the fine workmanship of the sword's pure gold handle. That's because he was living in 600BC when steel was exceedingly rare (google Vered Jericho Sword). Had it been Joseph Smith writing this account, the gold digger that he was, I imagine that he would have put more emphasis on the ornate solid gold handle and not the blade. Also, the term "most precious steel" suggests a knowledge that there are different grades or qualities of steel. Nephi, who seemed to have a passion for metallurgy, immediately appreciated the true value of Laban's ancient steel sword (1 Ne. 4: 9).

The next reference to steel in the Book of Mormon is in reference to Nephi's bow. Lehi and his family were traveling form the Valley of Lemuel (Wadi Tayyib al-Ism) across the Arabian Peninsula to the Land of Bountiful (Wadi Sayq, Oman). Nephi simply says that he broke his bow and they couldn't hunt food and were starving. Well, there is an important detail about the manner of of his bow's demise which Nephi said was made of "fine steel." While Nephi says his brother's bow's had lost their spring, Nephi says his steel bow simply broke. This is perfect science. While steel is harder than iron, it would be less likely to lose its spring but would have been more brittle and would be more vulnerable to breakage (1 Ne. 16: 18-23) (articles on steel bows of ancient India).
Finally, when he was commanded to build the ship to cross the ocean he immediately asks "where do I find the ore." It seems Nephi was well aware of what to do with the ore and how to make metal tools. I would also point out that Nephi says he obtained metal ore "out of a rock". This is again, perfect science. Iron in particular was obtained by heating/smelting ore (hematite or magnetite) containing rocks. Only very rarely was iron obtained from nickle-iron metorites:

What is more amazing is that LDS researchers have gone to Wadi Sayq, Oman and the nearby Dhofar mountains; the candidate site for the Land of Bountiful and found rich iron-ore containing deposites which were previously unknown to the government of Oman. But, smelting iron requires temperatures much hotter than a simple wood-buring fire can achieve. Iron smelting requires a blast furnace. That is why Nephi's mention that he made a bellows to "blow the fire" is spot on.
1 Ne. 17: 11 11 And it came to pass that I, Nephi, did make a bellows wherewith to blow the fire, of the skins of beasts; and after I had made a bellows, that I might have wherewith to blow the fire, I did smite two stones together that I might make fire.

Now the temperatures required to smelt iron from hematite or magnetite exceed that which can be achieved by the simple bellows Nephi describes. However, it turns out the iron mineral native to this region near Salalah, Oman is a kind of iron carbonate called limonite and ferroan dolomite. Researchers have demonstrated that sponge iron can be smelted from this ore at much lower temperatures than is required for smelting hematite or magnitite. Using this particular iron ore, Nephi would have been able to fashion iron tools using a simple bellows to achieve the required smelting temperature.

Upon arriving in the Americas, Nephi separated from Laman and Lemuel and established the city of Nephi. Just as Nephi was taught in all the learning of his father, he taught his children in all his learning. Nephi taught his children to work with metal and wood. Nephi presumably developed his skills as a blacksmith while living in Jerusalem. But Nephi learned about woodworking from God after being shown how to build the ship which brought them to America.

2 Ne. 5: 15 15 And I did teach my people to build buildings, and to work in all manner of wood, and of iron, and of copper, and of brass, and of steel, and of gold, and of silver, and of precious ores, which were in great abundance.

How come there is no swords in the Mormon History Museum or any museum from the time Nephi was in America?

Where is the physical proof?

#1 Absence of proof is not proof of absence.
#2 metal rusts; especially in a tropical environment like central america as opposed to arid Jericho
#3 God wants us to rely on spiritual proof and not physical proof. If you ask in prayer, he will give you all the proof you desire.

I am not posting to make a comment but rather to find out what the name of the painting that you used is and who is the artist.

I have searched for a couple hours now to find this information with no luck.

Thanks
I will say that the post is well written and thought out keep up the good work.

Please send your answer to jbeal@cedarfort.com

Are you using the book itself as evidence to support its own accuracy?
Do you understand that self-supporting evidence, is not evidence?

BRoz:
Absence of proof is also known as not having evidence. That is when you use probability. IE Because there is no evidence of tempered steel, coins, silk etc - there is a high probability that it did not exist in that area in the past.
As for falling back on some kind of spiritual proof - I take from that you mean some kind of holy spirit or feeling (rather than God being kind enough to give you a vision of the past or some such). As for that, you do know that the same experiences (or chemical reactions) in the body are had by all different peoples in all different faiths. Except they cant all be right, can they?

What are your thoughts?

Lets be clear about what the book says and doesnt say.

Steel: the only mention of steel in America was with regard to the Jaredites in Ether 7:9 but the Nephites who discovered their ruins said their swords were already cankered by rust by 125 BC. Jarom 1:8 mentions steel making but we do not know the extent.

Coins: The Book of Mormon does not mention coinage. The monetary amounts listed were weights of measure and not coins. The introduction to the chapter is mistaken.

Silk: There are many silk-like materials used for fabric which could be called silk. The silk worm is not the only thing that produces silk.

Spiritual Witness: I cannot speak for others and neither can you. The question is that if your belief is not based on a spiritual witness from God, then you have little basis to speak of spiritual things.

What I would love to know is how one would mine the ore or fashion the very first tool from the molten ore, without an appropriate tool to begin with. I would have prayed for help with that before the problem of finding the ore. It seems like the "chicken and the egg" scenario, nevertheless, it had to be possible somehow since Adam and Eve didn't come with tools nor did cavemen (for the non-believers) and we have such tools today.

Actually, at the candidate site for Bountiful in Oman, iron ore has been found that can smelted into the pure metal laying on the ground. Nephi was right on talking about using bellows to get the fire hot enough to met it down. He would have then used clay or rock as a crucible and molds to form tool shapes like a hammer or ax head.